Ibu is from Catalunya, has a massive pop, great style and charisma. I guess you don’t need much more in 2020 to make it in the skateboarding world. Check out his part in the Quota video and expect more « Wow’s » in the upcoming Carhartt WIP full length. 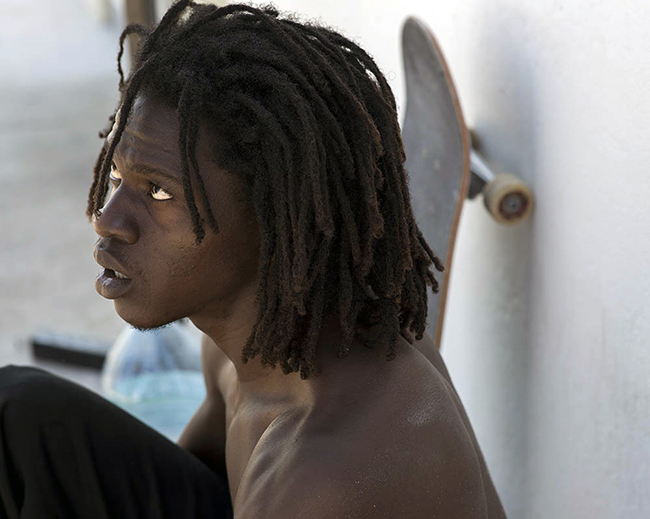 What’s it like growing up in Barcelona, and have you ever been sick of all the skate tourists at some point?
I don’t really know how it is to grow up in Barcelona because I didn’t grew up there. Actually I’m from a small town called El Masnou and it’s like 30 minutes away driving from Barcelona. It’s super small, super mellow, everyone knows each other, it’s slow life.

But I guess at some point you started going back and forth to the city, right?
To skate, I probably went to Barcelona like ten times in my whole life.

Really?
Yeah, I just went to ten different spots and I just realized that it wasn’t for me. The spots are cool but I’m looking for something different. Everyone already has been there to do their own stuff and I’m not a guy doing crazy tricks so I’d rather go look for another spot and maybe do a 50-50 instead of a tre flip noseblunt on a famous spot. So growing up over there was different. You don’t get influenced by anything because you don’t really know what’s new or whatever…

How did you get to skate then?
At the beginning I was skating by myself, then at high school, you know when all the kids start skating, I would skate with a small group for one or two years then they got sick of it. I just kept going, went to Barcelona and met people…

Would you travel to other cities?
Not really. Actually I think my first skate trip was to Bilbao with Feel skateboards, a brand from Barcelona. Over there everything is different, so I was hyped to be skating something else. That was my only trip for like 5 years. 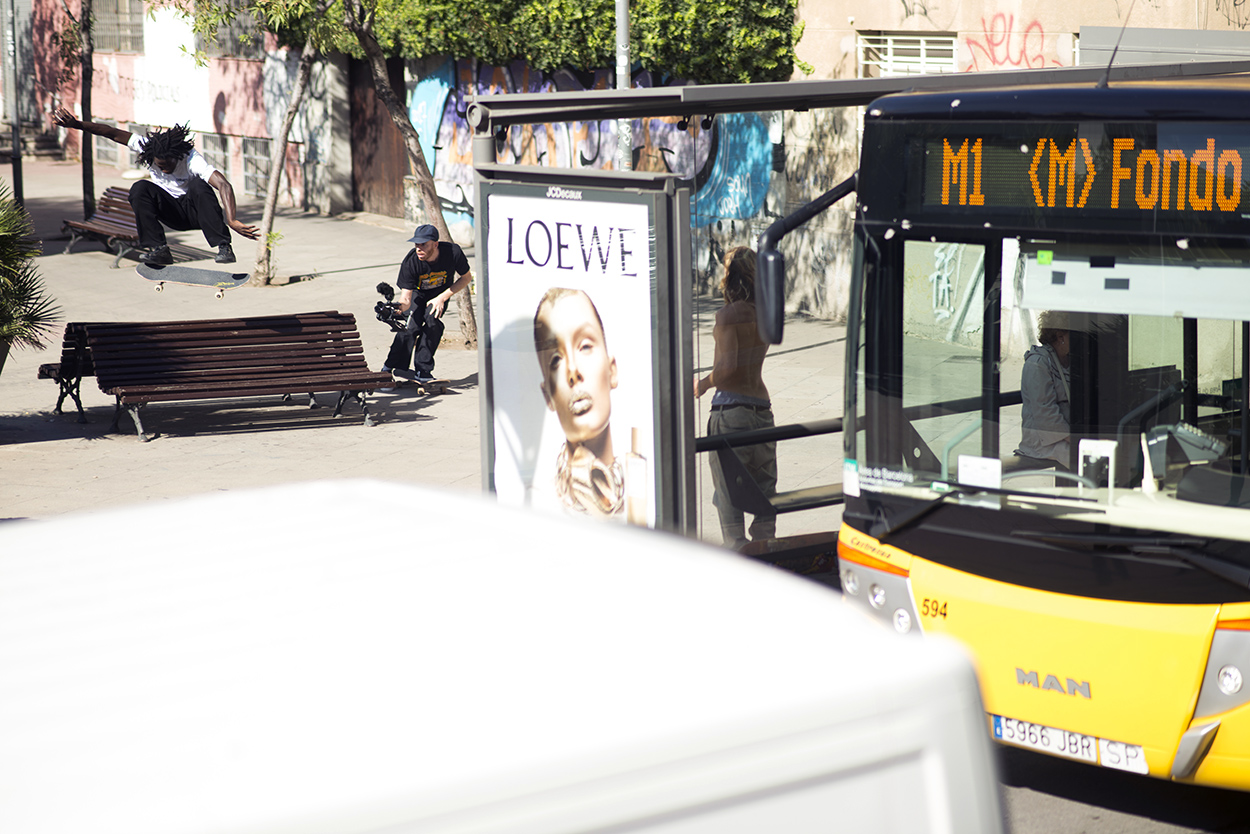 So you were never a MACBA local.
Never! Actually I mostly just go to Barcelona to go to the airport!

Ah ah! So you speak English, Catalan and Spanish?
And Mandinko, from Gambia. But I’m kind of struggling right now. My parents speak to me in Mandinko but I always answer in Spanish or whatever. So when my grandma is calling me it really gets tough to get a conversation, I miss so many words and vocabulary but I’m trying to learn it back.

Have you been there for skating?
No, I’ve been there once but I was like 3 years old.

I’m sure there is something to skate there.
You know Nico, the Quota filmer? He went there and built a skatepark. He told me that it was kind of sketchy to skate. There’s not real sidewalks, depending on where you’re going because you can find spots everywhere but you have to be lucky…

What’s the story? Where you on some big club?
It wasn’t a big club thing. You know indoor soccer?

Yeah.
The Football Club Barcelona told me to join their team. But my parents weren’t able to take me to Barcelona like 3 times a week and all that stuff so it didn’t work out. I maybe stayed there one month.

Would you have loved to pursue something into football?
I don’t know, I just like to play. I was with my friends, kids that I grew up with so it was funny we were all on the same team. We ended winning the Calatonian Championships, then we went to the National Championships, we went pretty far!

Did you give up?
I think I was 14 went I started to skate and you know, I got deeper into skateboarding even though I liked football as well, but at one point they told me « you have to choose », and instantly I was like « Ok, I’m gonna skate! ».

Ah ah, i’m asking this because for me football is the total opposite of skateboarding.
I also realized that I didn’t really like to playing matches, trying to win, all the competition…

I played football for one year when I was 12 and gave up because of the coach was pushing us to win, not to play!
That’s why I chose skateboarding. With football you have to be ready at a certain time, you have to be there that day at 12. When I go skate, if I’m not really feeling it, I don’t have to do it, nobody has to push me to do it.

Are you giving yourself a chance with skateboarding now? You have quite some solid sponsors now.
I really do and I can’t really ask for more. I like those trips we’re doing with Converse or Carhartt, you don’t have anybody pushing you. Actually I came back yesterday from Mexico, spent 10 days there with Converse. Nobody was pushing me to skate but I was so happy to be there that I skated the whole time! It’s more about the way you’re feeling.

Yeah, but I guess when they pay for your trip, hotel and food, they expect you to skate. That puts a bit of pressure.
To be honest, I never felt pressure on any trip. Same with Luidgi, he understands how to get the best of us without having to push us.

Yeah, the pressure can have the opposite effects.
Exactly.

Do you have a job?
No, I’m just skating now. Now I have this chance and it’s working well so… We have this full length video with Carhartt we’re working on now, and I’m filming with Converse as well, so there are two projects already…

Can you make a living out of skateboarding?
Yeah, I have enough to take care of my one year baby and my ten year old daughter.

That’s where the pressure is actually!
Yeah! But it’s so cool because my family is so supporting.

But it’s also a lot of responsibility.
Yeah, that’s why I do as much as I can now that is everything is set up with my family, and at some point I won’t have to go away 2 times a month… I like it, but I like to be home! It’s cool, I live not far away from the sea…

Is there a surf spot like in Barceloneta or Sitges?
There is kind of one but a shitty one. My city is on the north coast from Barcelona. 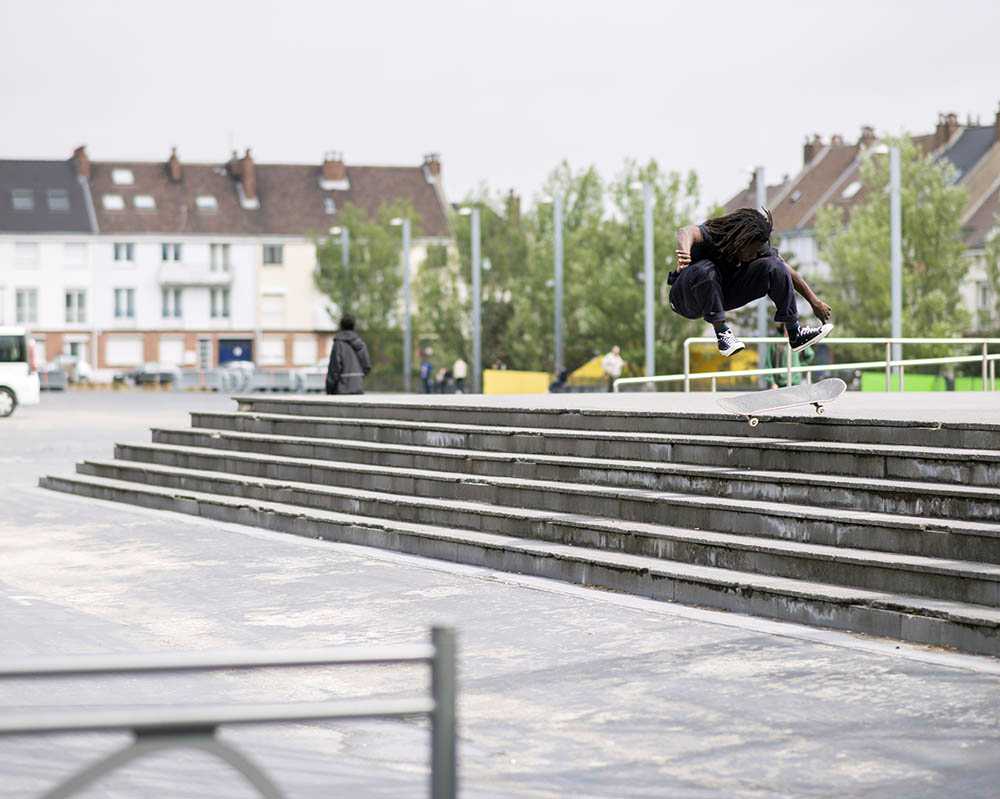 Would you sometimes travel to France?
It’s like a three hour drive to Perpignan, but when I’m home I don’t really like to go on missions like that, I’m already skating on trips every month…

What’s the next trip?
I’m not sure, probably Milan or Paris.

Milan is the new thing!
I’ve already been there, actually.

Oh yeah the ollie to tail slide. You have another trick in mind there?
Not really. I don’t like to have tricks in mind, when you just keep on imagining how it’s gonna be, then you get to the spot and it’s not like you thought it was!

The big 50-50 on the block at Le Dome, that wasn’t planned?
No, I went there, did a line and still wanted to skate the spot. I tried one just for fun and kinda worked so I just went for it!

Would you do these ollie contest back in the days?
Never! We used to to piles with our boards when we were kids, that was our competition. After four boards it would get difficult! I don’t know when I started to skate like this but I like to go over stuff.

That’s a different approach that opens a bigger playground.
Every time I go to a known spot, I think « Ok, people skate it like this… » so I start thinking backwards and try to skate it from the other side. It’s the way I like to do things!

Interview done in January 2020 in Paris.