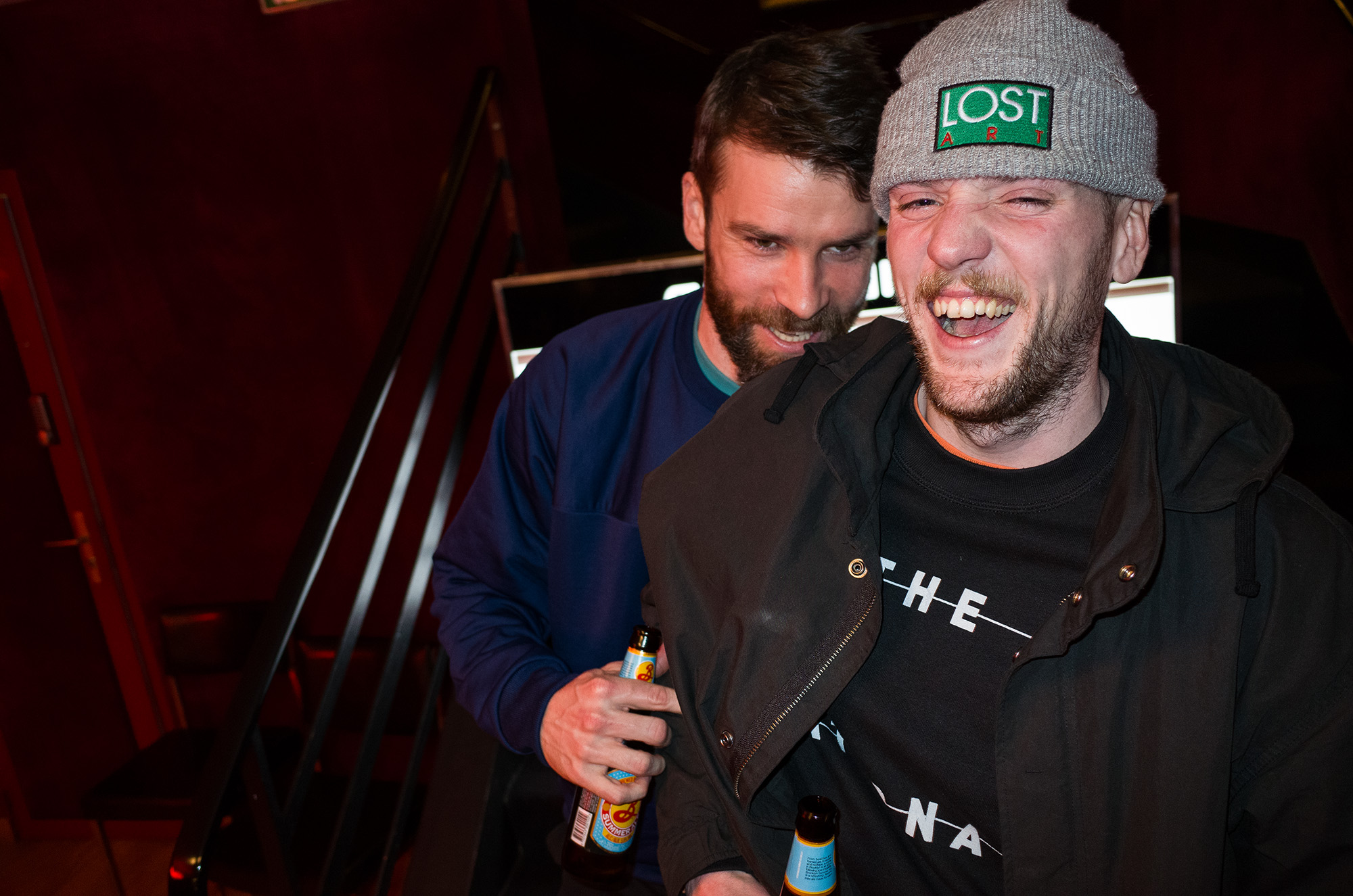 I tried to read the interview with Samu Karvonen on Liveskateboardmedia but I got lost at the first question.
Phil : oh, me too !
Denis : you need to study Greek mythology for twelve years or something to get it…

Let’s try to do this a little more simple. Ok ?
Phil : yeah, actually, just ask us a question !
Denis : but not one of those ones…

What is your quest ?
Phil : In life ? Oh Jesus Christ ! That’s actually a good question.
Denis : I can’t stop thinking about Pirates of the Caribbean « what is your quest ! » Ah ah ah !
Phil : But that’s a pretty heavy question. It’s hard to say and not be pretentious.
Denis : You know I’m only 25 !

These questions are a reference to something. Next question is : what is your favorite color ?
Phil : Turquoise !

This is actually in the movie The holy grail by the Monthy Pythons.
Phil : Aaaaaaaaah ok ! Yeah, ’What is the average weight of a migrating swallow’… Ah ah ah !

Is this movie an ultimate reference for you like it is for me ?
Phil : We’re not British, do your fucking homework !
Denis : ah ah ah ! I didn’t grow up with that movie !
Phil : We were just playing in fields !

Do the Irish like the English humor ?
Phil : I guess so.
Denis : It’s very similar.
Phil : They’re similar countries but it’s obviously different. Ireland was a colony of England for hundreds of years…
Denis : To this day. Facts !

And the Monthy Pythons aren’t such a reference for you ?
Phil : Yeah, I like it, I watch’em.
Denis : Actually, they’re a little funny but it was always closely tied with religion and especially catholicism. So when that film hit Ireland, there was such a stigma attached to it, and there’s such a deep stigma in Ireland with religion so the movie didn’t do so well I think…
Phil : I remember, I was filming you a few years ago and I said something about religion and you said you were still religious. I said ‘what the fuck ?’ I told you to snap out of it ! Ah ah ah !
Denis : I wear a holy medal, I wore a medal of St Anthony probably until I was 18 !
Phil : That’s who you pray to when you lose something.
Denis : Yeah !
Phil : Like when you lose your car keys, you just pray to St Anthony to find them ! And it works ! Ah ah ah !
Denis : I grew up deeply, and still with religion…
Phil : Your mom is religious.
Denis : Oh yeah. It just makes you rebellious even more.
Phil : But seriously, when we grew up, everybody was religious.
Denis : Everyone.
Phil : it was until the smartest guy in school was like – ‘what happens when you die ?’ – ‘you rot’. And we were like ‘wooaaaw’ !
Denis : That’s it ! As well, especially where I grew up, religion gives hope to people who don’t have anything to believe in, or goals. I wouldn’t declare myself agnostic or anything but I can definitely see the benefits of having religion.

Why did you decide to do a movie about this guy, Phil, and why did you accept, Denis ?
Phil : Well, it snowballed. He showed up in Malmö, drunk, at the Vans Park Series…
Denis : After being raped. Boys can be raped as well.
Phil : … and it sucks as a competition. There was a bunch of fucking Yanks of the platform like Jake Phelps, Patrick O’Dell, and you couldn’t drink and you needed a wristband to get there.
Denis : I had a six pack and two wristbands, and I gave one to the chick that I was with.
Phil : the rapist.
Denis : no, just my friend. But I had the second one in my pocket.
Phil : anyway, the vibe was shit. Because it’s the Vans Park Series. Like any big competition.
Denis : competitions suck !
Phil : there was a bunch of bros who were like ‘yeaaaaah’ and Patrick O’Dell was trying to Snapchat Denis who goes ‘hey Patty ! if you don’t fucking delete that Snapchat of that fucking Iphone it’s going in that bowl !’ and he turned white ! Ah ah ah !
Denis : Yeah, I didn’t want to be a part of that Snapchat thing. I have much respect for him being Patrick O’Bell but…
Phil : Patrick O’Bell ! Ah ah ah !
Denis : There was no one there having a fucking laugh !
Phil : He came in and just destroyed every American on the platform. Jake Phelps had all his guys around him and Denis was like ‘don’t ever listen to what this fucking cunt says !’ Ah ah ah !
Denis : Ah ah ah ! ‘So you’re acting like a big lad because you have your crewnies with you !’ But nobody could get beer !
Phil : So I thought that was a lot more interesting than what was happening at the contest. So we started filming. And we get along quite well !
Denis : we worked together before.
Phil : Yeah, we filmed some skate stuff before.
Denis : but it wasn’t supposed to be a documentary at first.
Phil : Yeah, it was just meant to be a short thing.
Denis : My original idea, and I feel like I shared it with you was : let’s get someone to pay for us and our mates, to go around skateboarding and do interviews with everyone of them and see what they think of skateboarding.
Phil : Oh shit, yeah, that was the first idea ! But all your mates are boring ! Ah ah ah !
Denis : Yeah, they don’t want to travel with me !
Phil : but then it just snowballed and then all the drama happened obviously without a plan. Because Denis disappears all the time !
Denis : and there’s a lot we kept from…
Phil : yeah, there’s a lot of things we couldn’t put in, for legal reasons ! You laugh but I’m not even joking !

When people ask me about the movie, I just tell them Denis could be the Irish David Martelleur.
Phil : Yeah, but I haven’t seen that film.

This one guy made a movie about David Martelleur called Danger Dave for 5 or 6 years.
Denis : a skater ?

Yeah, you should see that.
Denis : I will.

Ok, I only have one last question.
Denis and Phil : Only one ?

Yeah, it’s gonna take me hours to write all this down.
Denis : I hope you get the subtitles otherwise you’re fucked !