I’m getting old. I don’t shoot that much in Paris anymore. I still skate like once a week like but most of the times I’m taking the easy way to the skatepark. I can’t even remember my last street session in my hometown city of the 1000 lights. So when Valeri Rosomako asked me to be the official photographer and guide to the upcoming Radio/IrieDaily parisian tour, I thought it’d be a good opportunity for me to get back into the real skate business and connect with the rawness of the parisian street life. And on this special last point, no one was disappointed. Here’s a few random stories we got to witness during that week. 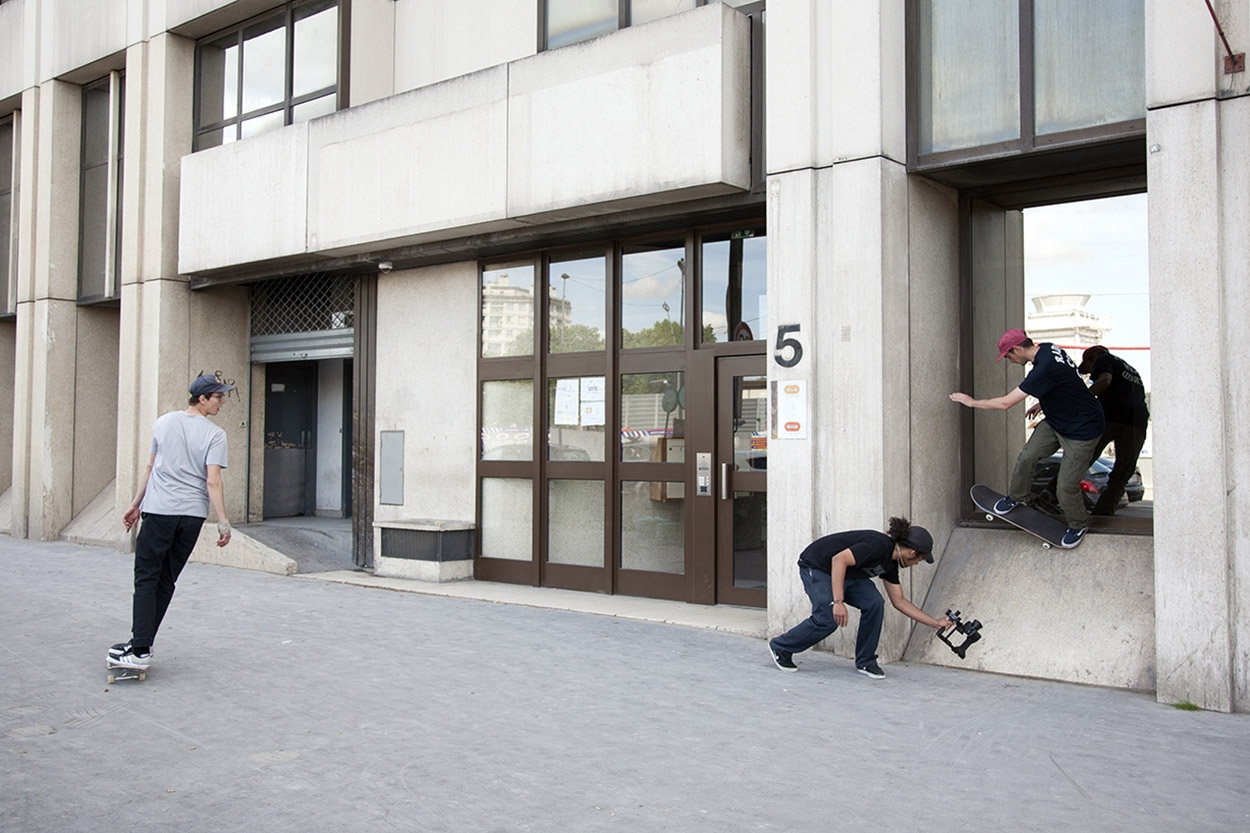 Junkie business
After a quick argument with some angry local dude who didn’t enjoy the simple pleasure of getting his ankles ruined by a lost skateboard coming from the transition of the now infamous melting house in Gare du Nord, we decided to head up to a next ‘new’ spot, on the other side of the train station. Not really a new spot actually but they put some smooth asphalt where it used to be cobblestones on that bank on the side of a double set. Known to be a junkie spot, this place is located between the taxi entrance of the station and the emergency room of the nearby hospital. Busy streets, loud wasted people, ambulance sirens, piss in every corner and angry taxi drivers. Konnie was trying to ollie over the rail and land into the bank on his back wheels and it would take quite some time between every go to get some clearance. At some point a dealer came supplying his customers right in front of us. From there things started getting gnarly. Suddenly one of the junkies stood up totally mad, grabbed a trash bag that was full, took it upside down and poured all the waste on the sidewalk looking for a glass bottle that he instantly broke and started threatening his mate with the left piece of glass in his hand. Of course everyone is wasted and the whole scene is not even really violent as every move they do are actually pretty slow, but still, this guy could hurt someone badly and everyone is shouting. It’s just a mess and the run up is full of shit. We just leave before this gets deeper into the craziness. 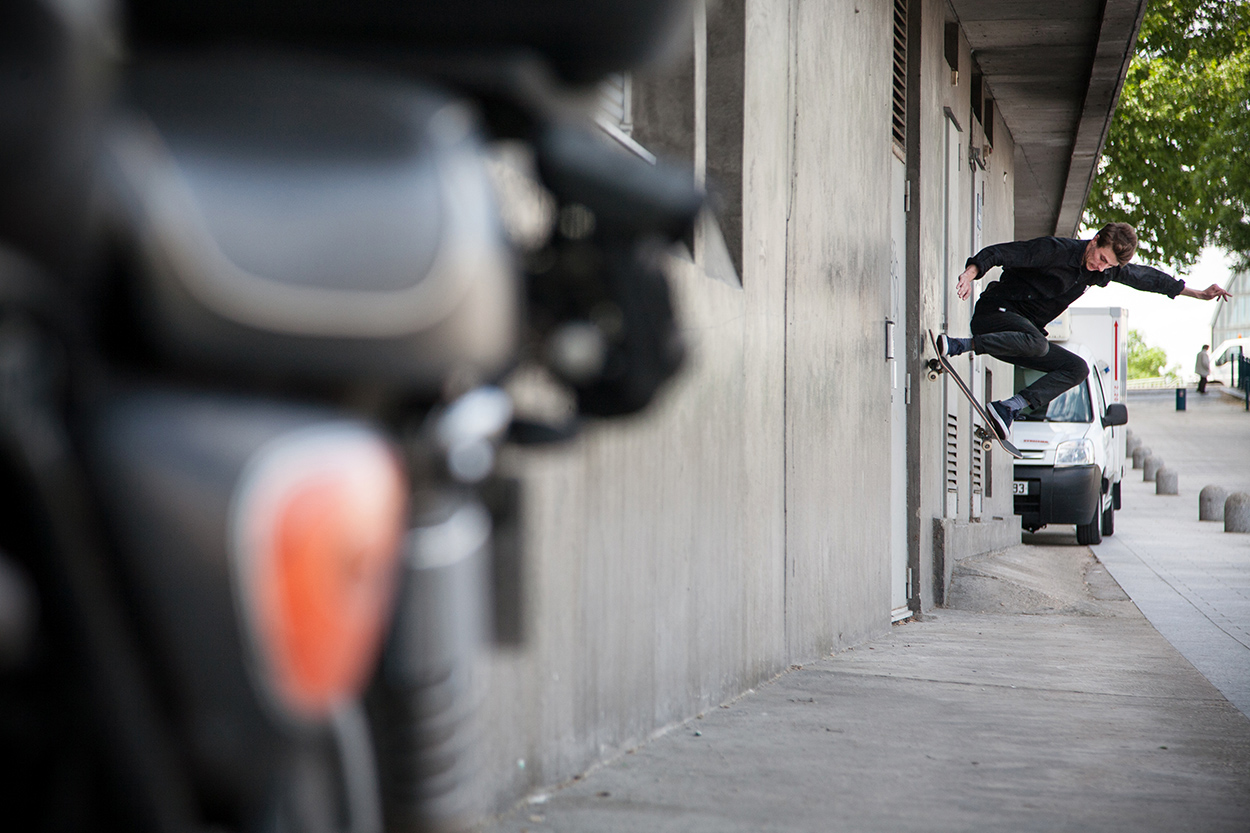 Got gold
Earlier that day in another sketchy neighborhood, we found a huge gold chain on which were attached MK letters. Not sure what MK stands for but Kelvin (our filmer) was stoked about it and instantly started rocking it like a real G. A couple spots later, some weird dude with a suit and a sideways hat sees it and starts pointing at Kelvin’s neck treasure. He likes it and wants to buy it. Kelvin’s quite broke but doesn’t want to sell it at all. We’re all like : « what the fuck you care ? Sell that shit ! » but it’s too late, and shouting « Fifty euros ! » at the leaving dude doesn’t help. Too bad for us, it was almost beer o’clock. 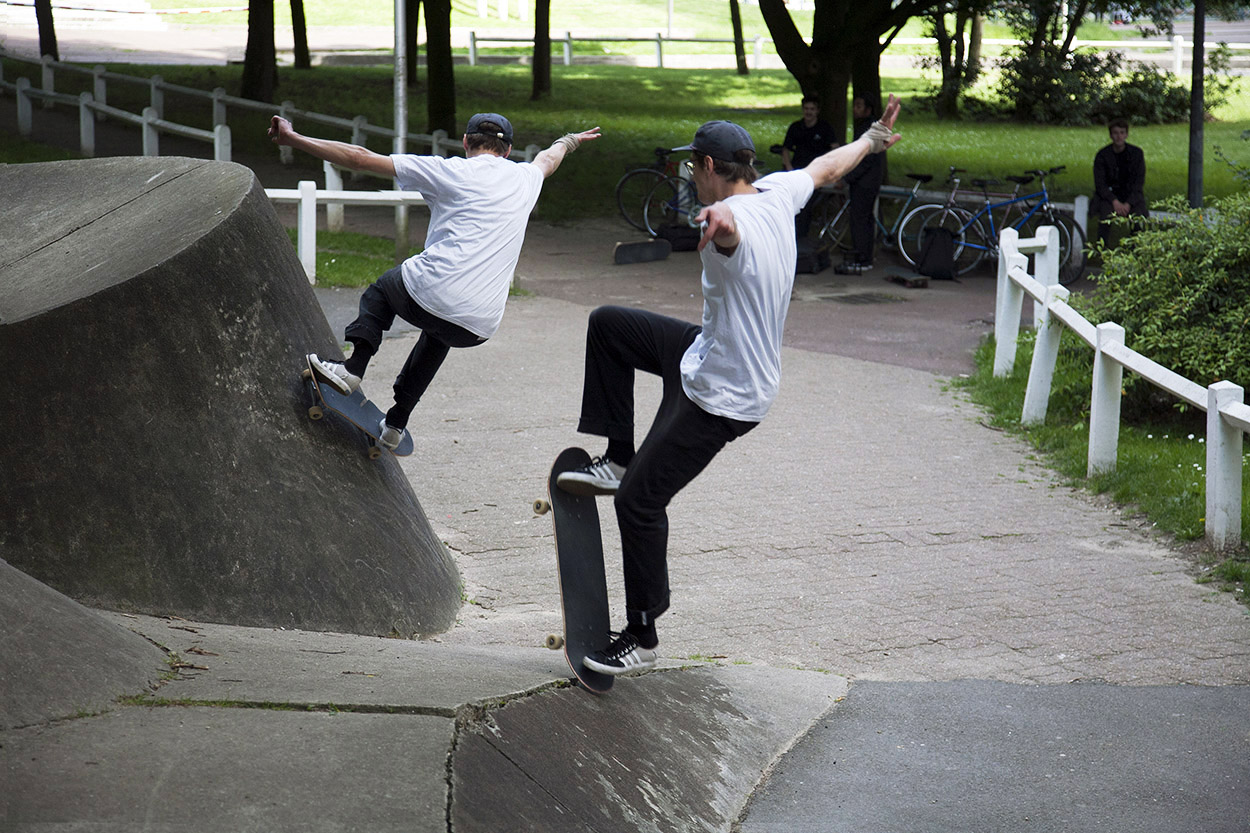 Water, fire, fashion
It was supposed to rain that day but we managed to get to skate between two rain showers at Le Dôme. By the way, only skaters call that place Le Dôme, if you’re ever lost in Paris and look for it, ask for Le Palais de Tokyo. No one really knows why it’s been called Le Dôme, though the best explanation I ever got is because on the ceiling of the top part, there is a circle that looks a bit like a dome… Anyway, the world famous spot is located in the richest part of town. The people that live here are so wealthy that they don’t care anymore about what’s going on in the rest of the world. Last year they protested loudly against a small (official) refugee camp that would take a few hundred people when other districts in the city already had taken thousands. Fuckers. So there’s not that many homeless people around, but a few ones manage sometimes to stay at Le Dôme for a few nights or even a few weeks. So we’re waiting for the spot to dry up and eventually, Le Dôme starts burning. A homeless’ stuff had been set on fire. A dirty sleeping bag and clothing can make quite big flames and a thick black smoke. No one’s hurt. No explanation. At the same moment, on the lower terrasse of the building, a couple of fashion shoots are taking place. A woman is posing weirdly with no pants on the right and a girl in trendy sweatpants on the left. 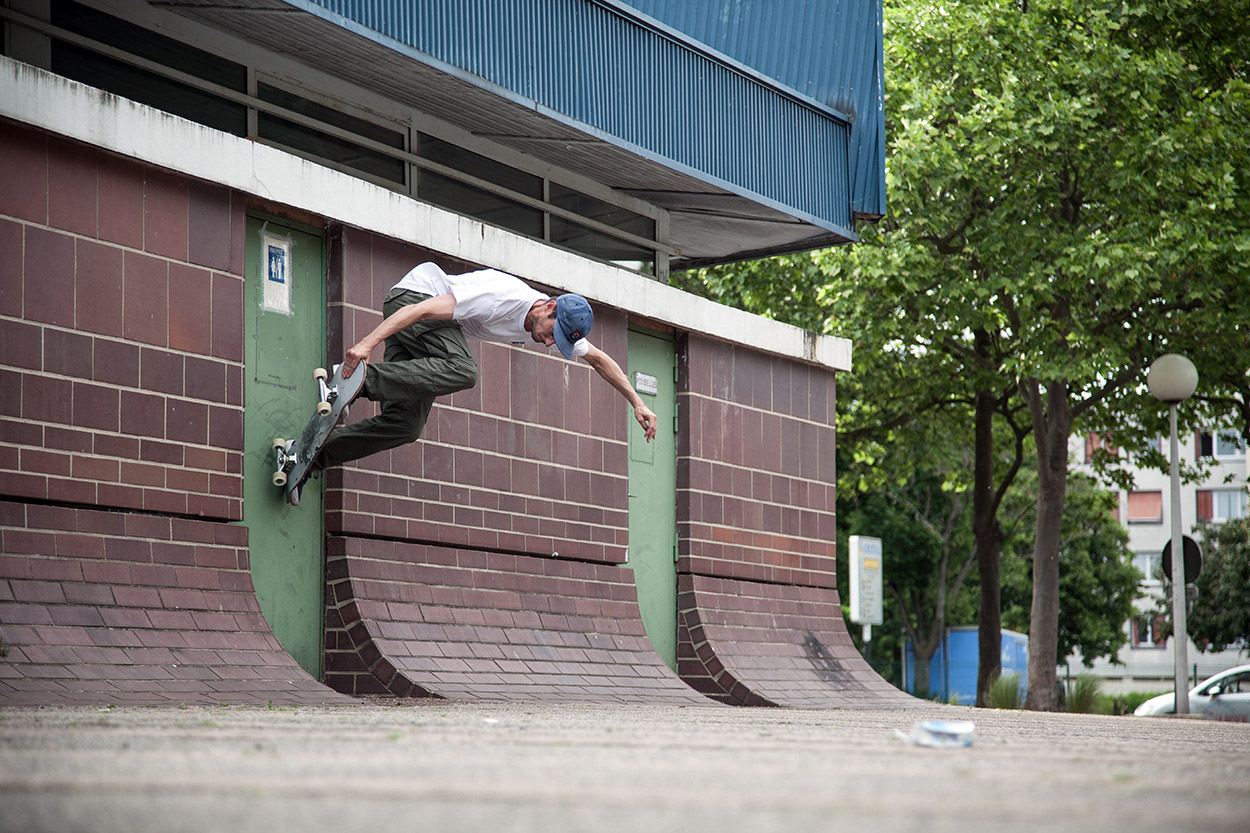 Close encounters of the third Kind
We’re in Créteil. A storm is growing in the dark clouds, the wind gets strong announcing an upcoming hard shower. We take shelter under an excrescence of a building facing the infamous plaza, against the windows of the local official business office or whatever it’s called. Two guys in ties are leaving work, see us and tell us : « This office is closed, come back tomorrow ! Ah ah ! ». Classic jock’s humour so we laugh politely back to it. Then they see our boards and start talking to us about one of the guy’s kid who got a skateboard for Christmas, blah blah blah, Olympic Games, stupid shit… But when they see our 12 pack of Heineken they’re kind of surprised and start lecture us. No one but me actually understands what they say so I feel like I’m the one who’s got to talk back to them. But they don’t even listen, they just feel so superior (they’re standing, we’re seating on the ground, they wear suits) so I fake some laughs and they finally leave. Not sure if I have more in common with these guys or the junkies in Gare du Nord. 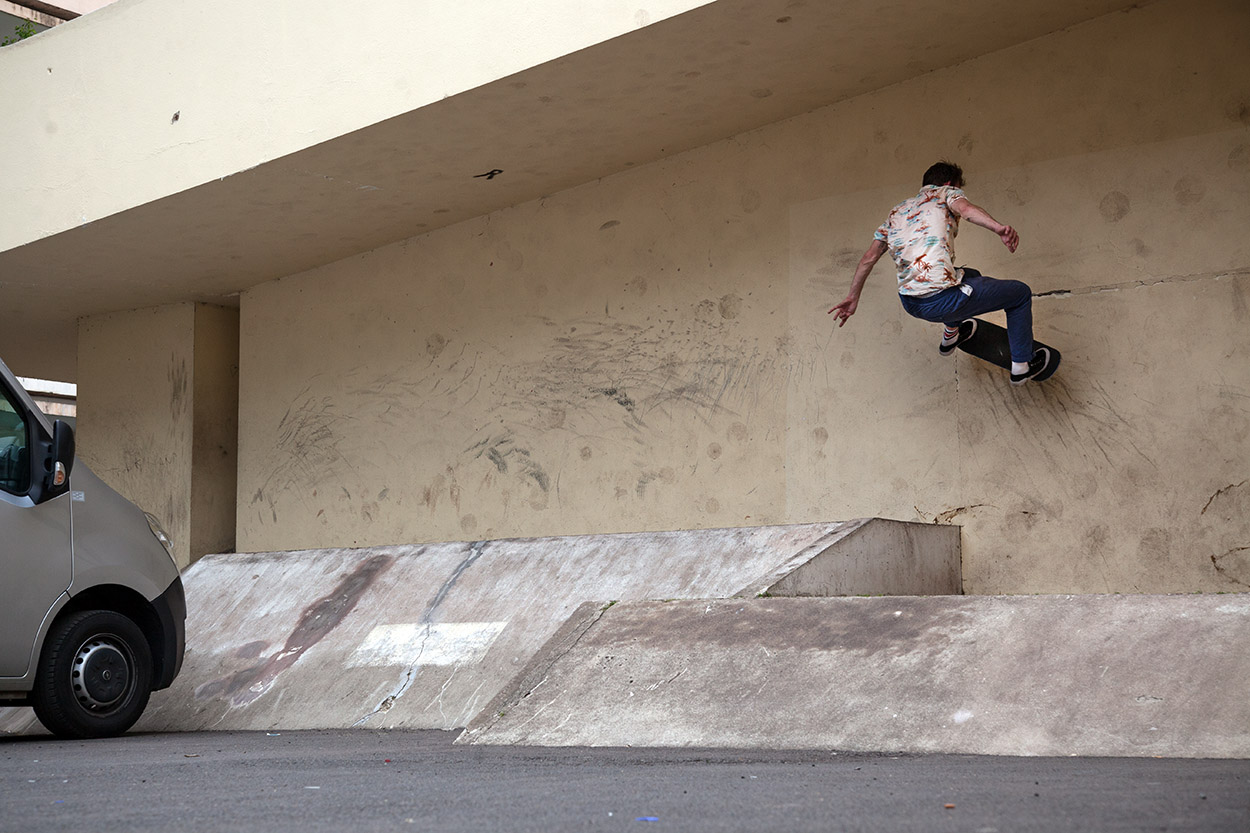 Street selfies
Another sketchy spot, and I’m shooting from the other side of the road. A really weird guy comes to me and starts talking in some obscure language and the only thing I get is the word « photo ». He looks likes he’s high on something and he’s pretty serious. I’m not sure what he wants and I have to keep on shooting that wallride. My left eye is closed and the other one is in the viewfinder so I can’t see what he’s doing when I’m shooting. He could have a blade or anything spiky and stab me when I’m on that position but he’s just standing there starring a me with his bloody eyes. Kind of a creepy situation but it seems like he only wants me to take a photo of him. There’s no reason to do that but it wouldn’t be the first time. Every once in a while, random people ask me to take photos of themselves, as if the big camera I’m holding in my hands could take them into the lights of fame. And it seems like this one believes my camera could take him out of the mess he’s into so he gets quite annoying and forces me to leave my spot. In the end, nothing happens. Just another parisian street scene before heading to the next spot…